Central Bank Digital Currency gains interest across the Globe.
Central Banks are conducting research and embarking on Proof Of Concept.
Let’s have a brief look at wholesale and retail CBDC and benefits of its blockchain-alike implementations.

With CBDC, fintechs will be able to provide services w/o banks

TODAY: Any fintech provides new services on top of the existing banking infrastructure.

TOMORROW: fintechs will be able to provide services without banks.

Qplatform works today in current paradigm, facilitating Bank-to-Fintech integrations. Meanwhile we consider the tomorrow option as a great market opportunity, that’s why our IT strategy is built with appropriate technologies in mind.

Private sector payments innovation focuses on the front end system - which faces users directly, including new ways of payment initiating (mobile/contactless) and overlay systems which wrap existing settlement systems and most of an existing framework around fresh interfaces.

Over the past decade, we see increasing number of nations have implemented faster or real-time payments systems:

Yet these solutions provide new digital rails for payments within a currency zone, services are offered via consumer’s bank accounts, and txs are settled inter-bank.

Worth mentioning here, WeChat and Alipay in China. These are full-stack but closed-loop payments systems: both payer and payee live in the same system, no settlement across separate systems takes place. It cannot be a global solution because of: coordination challenge, risk concentration which comes as the cost of a lack of interoperability.

Among others, proper CBDC solution should implement:

All these features are natural attributes of blockchain-based systems.

This represents the paradigm shift from account-based transfer of value to storing and transferring of value on blockchain.

While some (public) blockchains have known drawbacks:

According to R3 consortium, Corda blockchain protocol overcomes all of them:

To prove this in action, R3 conducted an experiment with DLT for domestic network together with the Bank of Canada: Project Jasper. Among its conclusions, it was found that DLTs alowing integration with financial market infrastructure ecosystem along with settlement finality, privacy and scalability, such as Corda, could run it better than existing proof-of-work blockchains like Ethereum, still being more cost-effective.

While tokenized CBDC brings the opportunity to extend access to central bank money, not all participants will have access to (or want to be the custodian of) their CBDC with access to CB’s balance sheets.

For those who won’t, the mechanism of API accounts comes into play.

It is described in the generalized implementation option for CBDC proposed by R3. A user will communicate with a chain node through an API: 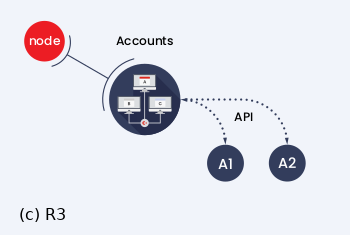 A node can be held by organizations of two tiers:

Top-level structure scheme of account-based CBDC looks like this one: 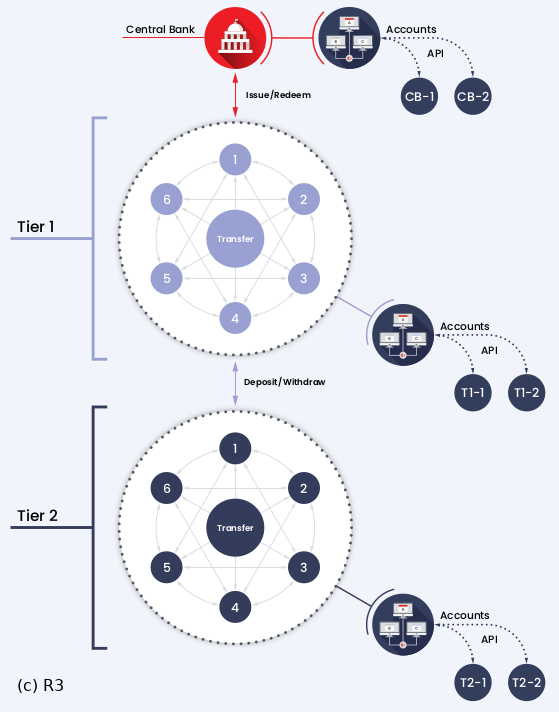 With vast experience in developing financial services integrations, Qplatform is looking forward to build and provide CBDC-access API on its marketplace to allow seamless plug-in for non-ledger participants.