Guys from Parity Technologies accumulated a huge experience on building blockchain nodes during development of their parity-ethereum, parity-bitcoin and parity-zcash clients. Amazingly, what they do next is that they provide the Substrate framework for building custom blockchains from scratch!

To build one was a quite hard task to accomplish, as before designing your own chain’s Consensus rules, you need to solve out a lot of underlying basement stuff, to number a few:

With Substrate, you have the building blocks for all these parts, presented as Modules written in Rust. So you can build your chain basics (meta-layer) much more easier and concentrate more on what matters most - your own chain Consensus and Governance rules.

April 24-25 Parity took the sub-0, the first Substrate developers conference in Berlin, which I was lucky to visit. That was a happy time among Polkadot Substrate core-developers and first community projects building on it, willingly sharing their experience. I think it would be handy if I report some pieces of here in my blog.

Every chain build with Substrate has a Runtime: a WebAssembly binary blob with a number of entry-points known to the node. Those entry-points are grouped into API traits. Two core entry-points are execute_block and version. They are grouped into the Core API which is required by the Substrate spec by default. Any API beyond that may be provided to add\support various functionality of the blockchain client, e.g. runtime module metadata, block authoring, the transaction queue etc.

For building your own Runtime, Substrate gives you the SRML (Substrate Runtime Module Library), i.e. a collection of components with which you can compose your brand new custom Runtime.

Gavin Wood gave us a number of insights on these runtime modules, which I’ll try to echo below:

(btw, the full list of SRMs could be found here along with the documentation for each one)

If you saw any Substrate presentation before, you’ve probably seen this apple-like Substrate architectire diagram, as here on the Gav’s slide on SRML: 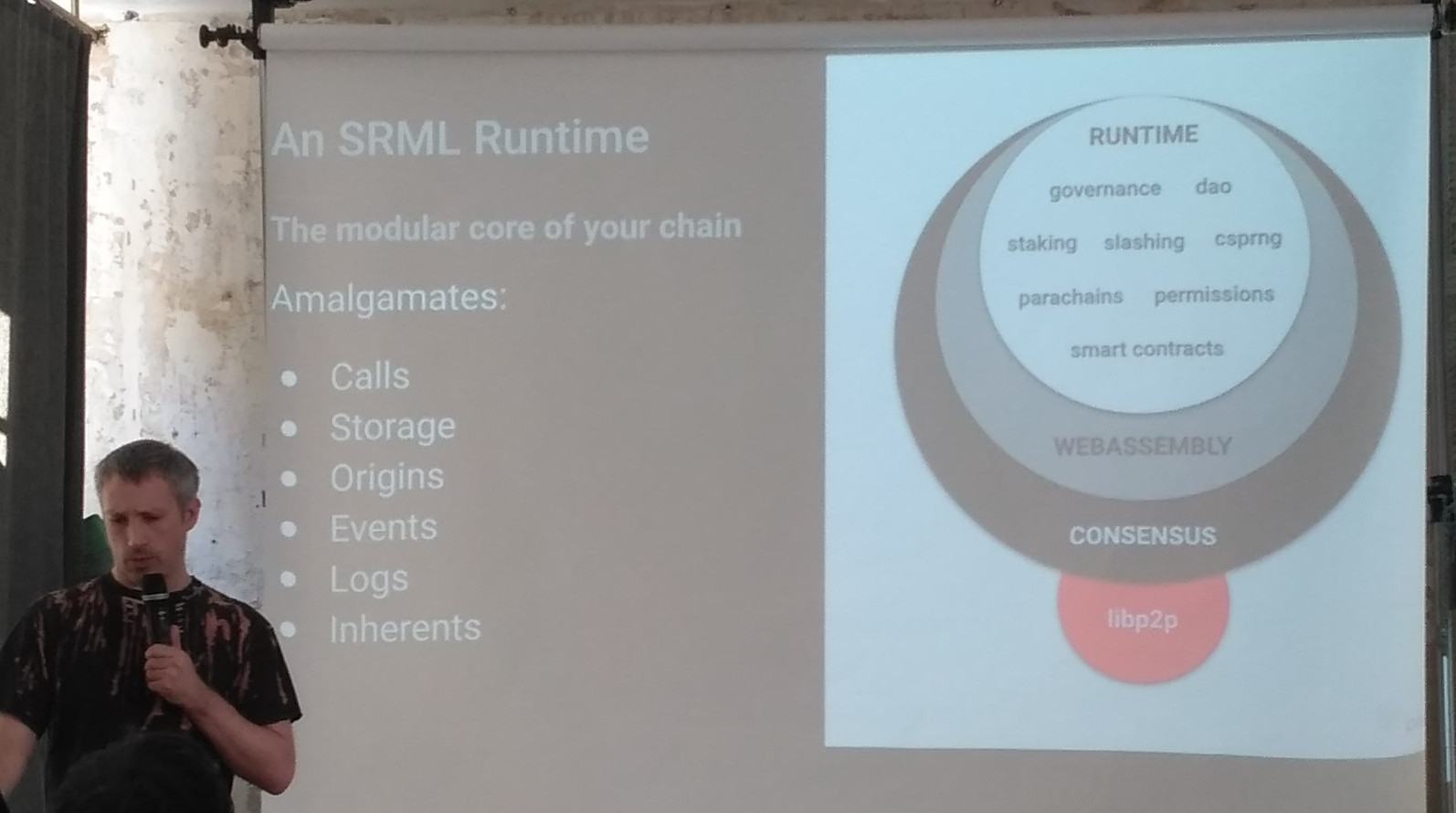 (Sorry for the slides quality. I hope better slides and video from the conference will be available soon from Parity team. ==upd May 13: video finally available on Parity’s youtube channel==) 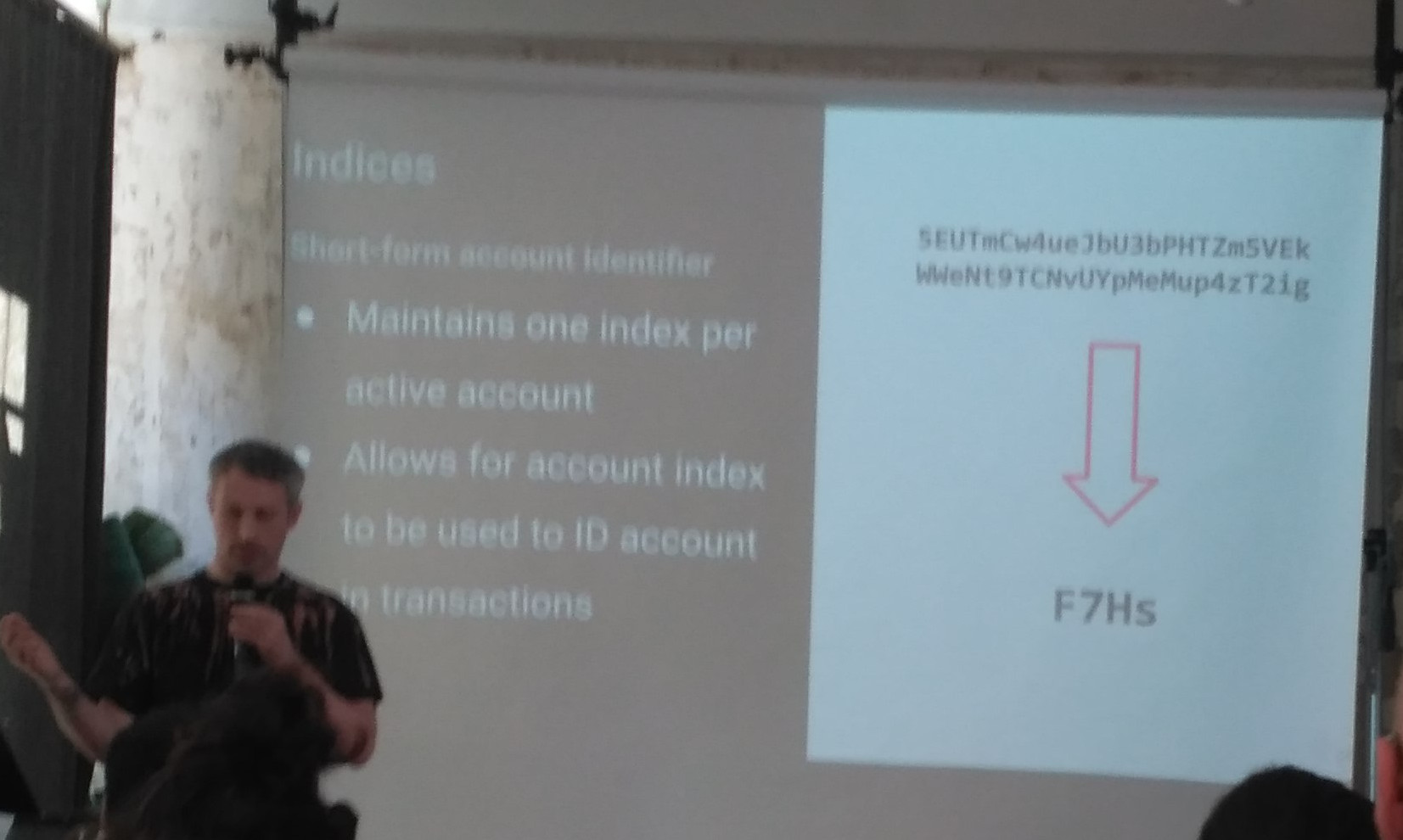 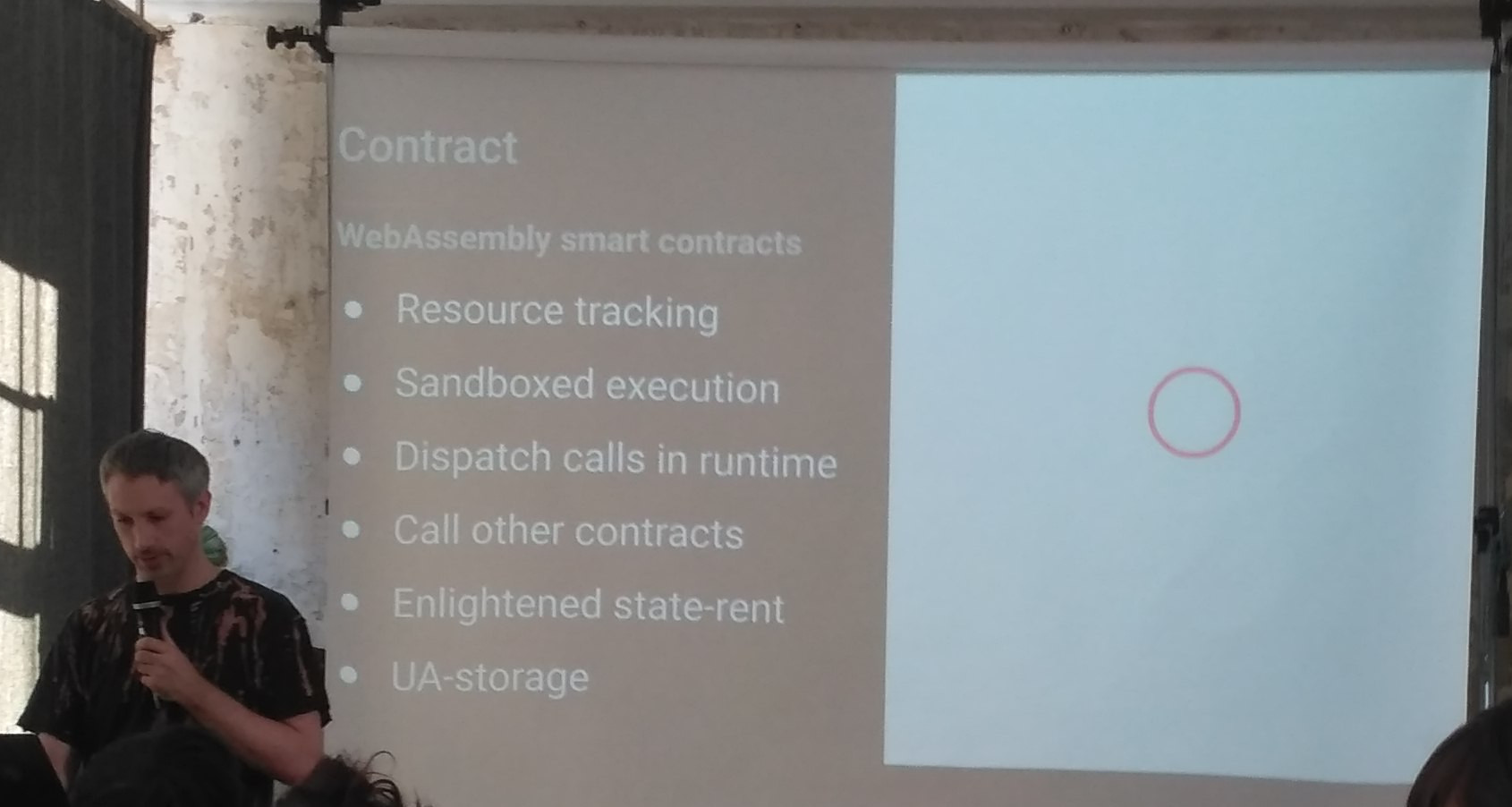 Interesting concept here is an Enlightened state rent - it assumes you don’t have to send funds to the contract, while the contract can use the amount needed from your account itself.

Another part of Gav’s presentation was devoted to the crucial part of chain logic - Governance model. Substrate offers quite a complete toolkit of modules to implement a variety of governance schemes. All we have to do now - #BUIDL a lot of them and let the time show which model performs best through passing the natural selection (evolutionary) process among blockchains.

In few years, decentralised worldwide companies will operate with billions of dollars, just like today’s corporations as Google and Apple do. But instead of a single CEO, these new economic players will rely on the proper governance model.

Governance is critical for management outward relationship (between jurisdictions)

Why we need autonomous Governance? 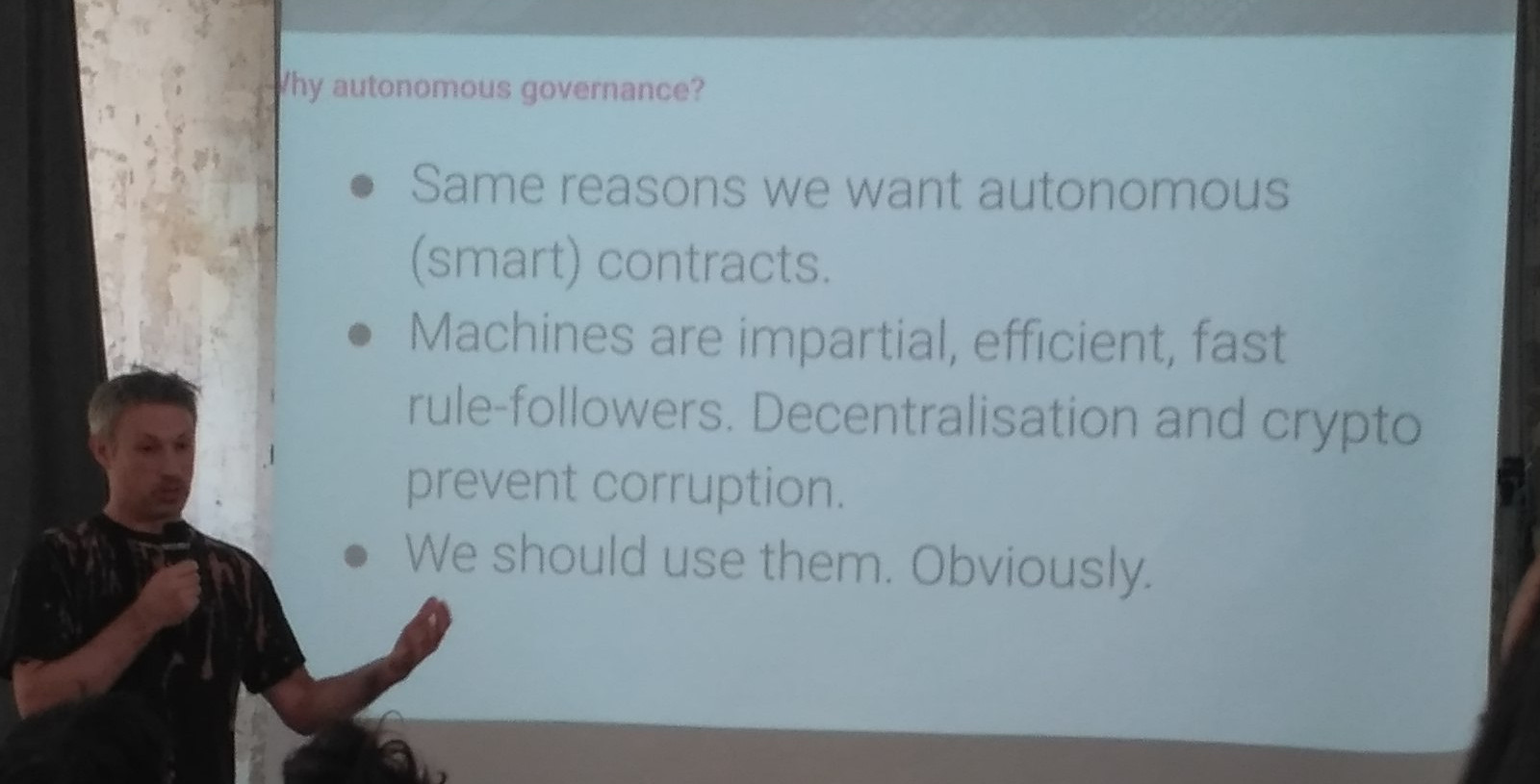 Interesting, that Polkadot itself hasn’t selected exact Governance Model yet (hopefully they would before the Release this Autumn). Anyway, there is some vision of it presented by Gav. 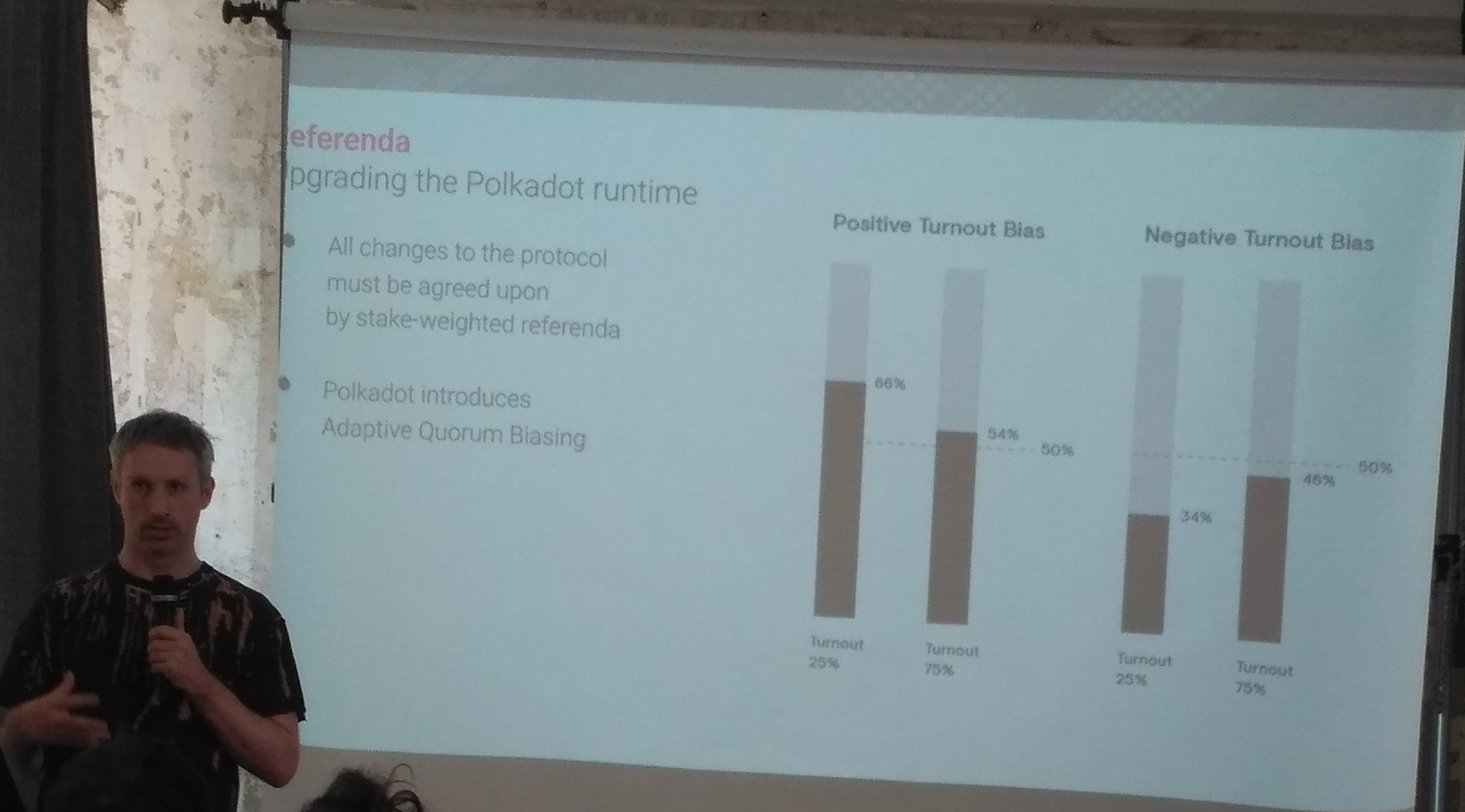 There are three basic modules for Governance building in Substrate: Sudo, Democracy and Council. Let us have a briefly look on each of them.

The simplest option - total authoritarianism. The only person make desisions. Only one account can be the sudo key at a time.

Role of the council 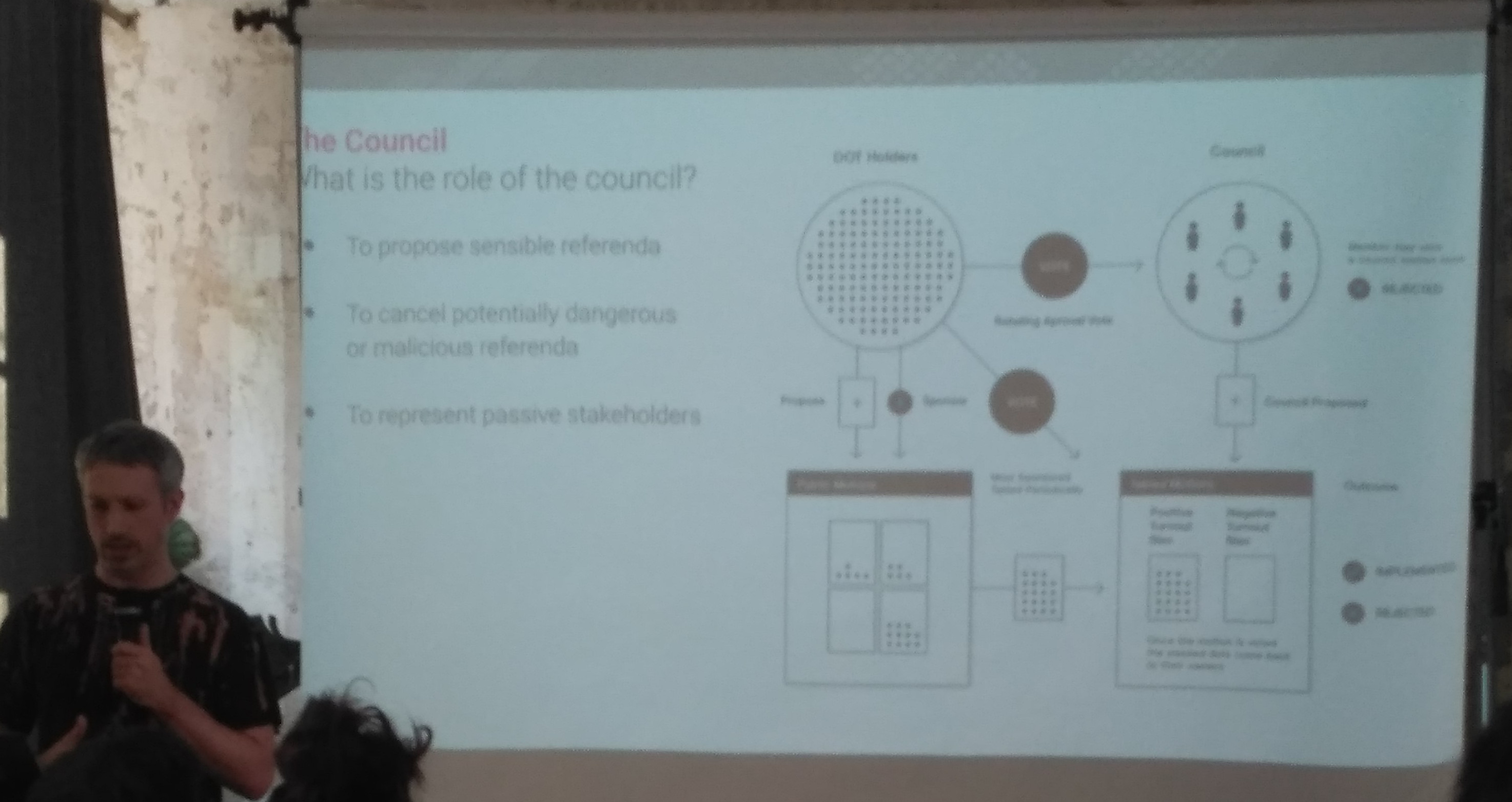 Abilities of the council

Useful for projects funding logic. Keeps account of the taxed cash and handles its deployment.

Why not Rough Consensus?

What is Rough consensus?

The basic rules should be the same for all chains

The Metaprotocol Model: traditional vs polkadot

Excerpts from AMA with Gavin

Questions are written exactly as they were asked (they are stored in sli.do). Answers are my rough paraphrase. Hopefully, the video of the AMA session will be published soon, and we’ll get the exact wordings. ==upd May 13: video finally available on Parity’s youtube channel==

Q: How do you plan your week/day? What are your productivity tips and tricks?
A: I actually don’t plan, and have a meeting allergy. Meetings kill productivity

Q: What person in the space gets too little credit?
A: Aaron, he commited a lot in Ethereum early development

Q: What do you think Polkadot will look like two years from now?
A: I don’t know. But it will work) and will have some economy, but specific details are yet unclear

Q: What’s the biggest challenge in building Polkadot?
A: Networking. Opposite to the way we developed Ethereum (with the Yellow Paper as the exact specification), in Polka what we have is only our vision. This project is 50% research and 50% development. This is hard and takes more time.

Q: What factors do you think can lead to the failure of Polkadot, and more broadly the decentralized vision we’re after?
A: It may turn out that the parachain paradigm is unviable. We don’t know yet. There will be a competition of paradigms. Polkadot may fail with wrong Governance.

Q: Are there any projects related to Security Tokens developed on Substrate? Would you consider such a project valuable to Polkadot?
A: I think yeah, why not, securities on Substrate would be valuable.

Q: In the context of a multichain future, why is polkadot apparently positioning itself as a “central” relay chain?
A: I just have no idea how to implement it in other way. But I’m open to suggestions.

Q: What would you recommend for someone to do who is looking to get started building with Substrate?
A: Substrate-technical matrix room, Substrate docs and tutorials. Try new things and ask questions.

Q: ED prunes accounts with a small balance. Some accounts may have a low balance but being valuable in terms of identity. Could ED take that into account?
A: ED is for token value. System doesn’t understand passports and stuff. System only understands DOT amount account has.

Q: Why Rust?
A: Rust language forces to think about stuff. It is like forcing yourself to go to the gym or set on a diet. It is painfull, but you get rewarded.