Block Collider (BCLDR) claims to provide solution for multi-blockchain integration, which is a new blockchain itself. But analysis of technical details revealed from their WP and online docs shows that this is neither blockchain nor chain bridge.

This review has been made based on

Crupto community has being working on the blockchain bridges for a while. Mostly elaborated works to date are:

They typically use messages for data transport between chains and SPV proofs for validation of tx existence in bridged chain. The communication between blockchains is implemented in two-side fashion, i.e. not only core chain takes messages from integrated chains, but reverse communicaion works as well, i.e. ETH and BTC chains get data from other blockchains with the protocols suggested. In other words, there should be Bidirectional Transferability between chains. This is achieved with scripting, by providing special smart contracts \ adresses for interchain data transfer and assets exchange on both brigded blockchains.

The only information BCDLR takes from other ("bridged") chains and operates with is hashes. Hash itself brings no valuable data, it is used to verify validity, integrity and tamper-proof of the tx data. In other words, BCLDR does not take transaction data from Bitcoin or Ethereum blocks. It just takes block hashes.

No particular details have been given on BCLDR chain arhitecture, state transition, virtual machine or scripting language. While these things are cruicial for designing blockchain bridges.

There is no Bidirectional Transferability between chains in the proposed solution. No interface for new chain connection given. No specificaions of interchain communication protocol provided.

As such, this solution cannot be treated as a blockchain integration. Rather, it is kinda restricted in-chain analytics tool. If you take etherscan.io and blockchain.info and put them into one box, you won't get new blockchain with it. Neither will you integrate anything with the ETH and BTC chains this way.

What "Mining" is in BCLDR

Spoiler: It is quite far from what people take as mining in blockchain...

Suppose they want to bridge BTC, ETH and NEO with BCLDR

Well, requesting miners to solve n+1 tasks (where n - number of txs miner wishes to put into the block) at once looks pretty weird. Moreover, the computational challenge used for block mining (i.e. distance between hashes calculated as Cosine Similarity) seems not to fit well with the network building. Here is why:

For some (probably often) cases even for two-chain case the computatinal challenge described above just has no solution. Let me demonstrate this on a school geometry example: 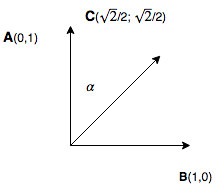 If orthogonal vectors A and B happened to be our hashes,

there is no such vector C satisfying the mining puzzle conditions

BCLDR block hashes depend neither on tx data included in the block nor on previous block hash. So nothing here constructs any chain of blocks. This is not a blockchain. By definition.

This kind of "mining" does not solve Byzantine Generals Problem. Still keeps unclear what particular problem does it solve... Seems that the only purpose here is just to have anything like "mining" on board.

Okay, maybe it's just a ledger to store data from other blockchains and serve them faster? Well, nothing being said about how tx data being acquired, structured, validated and secured. Maybe it is just an offchain-ledger which stores hashes taken from blockchains? Alright, but why then it makes sense at all and what value does it bring? - are still open questions.

Here I put some quotes from Block Collider whitepaper which contain false statements, with my comments.

Because of the combinatorial nature of base tuples. the Block Collider blockchain is consistently faster than the fastest bridged blockchain."

I explained above why this is wrong

Due to the variability of block discovery on all blockchains, where Ethereum for instance ranges from 6 seconds to 2 minutes and Bitcoin commonly ranges from 5 to 15 minutes, it will be impossibly difficult for miners to try to preempt combinations that cause the Block Collider blockchain sequence to favor one chain. This drastically increases the computational difficulty of the multichain thwarting attacks that involve shifting mining power on the Block Collider."

BCLDR mining time has nothing to do with the block times in other blockhains... Sooner you get the blocks from other chains, sooner you get input data and start to mine BCLDR block. Still the time which required to solve the Proof of Distance mining puzzle depends on algorithm you use for solving it ( Wagner–Fischer or other) and computatinal power you posess.

As we showed above, block time is not decreased. Not clear how mining split could help here (as all tx could be pre-mined)

Traditional hash-based approaches can be thought of as finding a threshold on the distance between the discovered hash, and the arbitrary reference point of "zero"

Definetely, Ethash cannot be thought of as this. See Ethereum Yelow Paper for details

From an intuitive standpoint, taking a hash of data transforms the data into an irrecoverably different kind of space — that is the intent of hashes, which are also known as "trapdoor functions". Since the Collider chain is generating its own hash, which references other hashes, for simplicity’s sake no additional space needs to be defined, and all operations can take place between hashes without entering any trapdoors. This commitment to elegance allows for interesting geometric interpretations of hash space, since Cosine Similarity is symmetric and is a well-formed metric. Moreover, as byproduct of computing an edit distance, the algorithm generates a description of how to edit one string to transform it into another, so that validating the edit distance is computationally simpler than computing it.

It is not clear, whether Edit Distance or Cosine Similarity is being used as computational metric on the hash space.

Lastly, whereas many hash algorithms are intentionally designed to be computationally expensive with no other purpose, edit distance is actually a useful problem to solve. If optimizations are found for inner loops of artificially constructed computational challenges, no great progress has been made. By putting a real, useful problem at the core of Block Collider’s computational challenge, any resultant work towards optimizing solutions also benefits the rest of the computer science community in the form of better core algorithms

NRG mining rewards diminish over time so that mining can continue ad infinitum on its fixed supply.

Nope. Why should miners do the job without an economic incentive? Once reward < costs, the game is over.

Based on their technical documents, Block Collider design, approach and architecture is in its very embryo state. If they implement what they claim to do in their WP, I think they hardly would deliver a "high-speed distributed multichain ledger".

Notwithstanding weak technical study presented in project documentation, Block Collider Node Github repository has more than 1.3k commits most of which done during Q2 2018. So there is a codebase. I admit that as discrepancies between source code and docs is the constant pain of startups, maybe the analysis of their codebase could reveal some better picture.